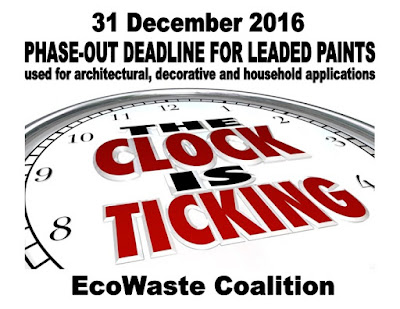 “The clock is ticking.”
As the phase-out of lead-containing paints used for
architectural, decorative and household (ADH) applications looms, the EcoWaste
Coalition, a watch group on chemicals and wastes, reminded concerned
manufacturers to hasten their shift to non-lead paint production.
By virtue of the Department of Environment and Natural
Resources (DENR) Administrative Order 2013-24, paint manufacturers have until
December 31, 2016 to phase out lead in ADH paints.
“By January 1, 2017, lead-containing ADH paints will no
longer be allowed in the marketplace.
That’s just 22 weeks away.  The
clock is ticking,” said Noli Abinales, President, EcoWaste  Coalition.
ADH paints are typically used to decorate residential
houses, school buildings, day care centers and playgrounds, as well as
child-oriented products such as toys, school supplies and kiddie furniture like
baby cribs, study desks and tables.
“We are confident that most companies are seriously
hurrying through their paint reformulations not only to comply with the law,
but more so to make available safer paint products that will not result to lead
exposure hazard to vulnerable groups such as
young children, pregnant women and the workers,” he noted.
“We recognize the Philippine Association of Paint Manufacturers (PAPM) for its
indispensable role in promoting industry-wide support for the said policy,
which prohibits lead levels in paint above 90 parts per million (ppm),” he
added.
Abinales recalled that the EcoWaste Coalition in May-June
2015 received formal pledges from some paint companies confirming their
commitment to comply with the lead paint phase-out policy, including the
Andalucia Manufacturing Corp., FH Colors and Coatings Corp., Globesco Inc.,
H-Chem Industries, Inc., Super Globe, Inc., Times Paint Corp. and Treasure
Island Industrial Corp.  The said
companies, except for Andalucia, are members of the PAPM.
Pacific Paint (Boysen) Philippines, Inc. and Davies
Philippines, the country’s top two paint makers, have already removed lead
compounds commonly used as driers or pigments in paint products ahead of the
issuance of DENR A.O. 2013-24.
Pacific Paint (Boysen) Philippines, Inc. and Davies
Philippines, Inc. have also successfully secured Lead Safe Paint® Certification
from SCS Global Services, a US-based third party certifying body, for their
Boysen, Nation, Titan and Virtuoso brands, and Davies brand, respectively.

“It makes sense for companies who have yet to finish
their shift to non-lead raw materials to switch to panic mode,” Abinales
suggested.

“We hope that not a single company will be left out in
the cold as the whole country celebrates the historic phase-out of leaded ADH
paints few months from now,” he added.

In the second quarter of 2017, the EcoWaste Coalition
will conduct yet another paint study to determine industrial compliance to the
phase-out of leaded ADH paints as stipulated in DENR A.O. 2013-24.
The group will release a report afterwards that will publicly
name compliant and non-compliant ADH paint products.
According to the DENR A.O. 2013-24, “any violation of the
requirements specified in this Order shall subject the person(s) liable thereof
to the applicable administrative and criminal sanctions as provided for under
Sections 41 and 43 of DAO 1992-29 and DENR Memorandum Order No. 2005-003
(Prescribing Graduated Administrative Fines Pursuant to Republic Act No. 6969
and DAO 1992-29).”
The EcoWaste Coalition will continue to assist the
government in monitoring compliance to the said policy in order to prevent
childhood lead exposure via the ingestion or inhalation of lead contaminated
dust or soil from lead-based paint and other sources.
According to the policy statement issued by the American
Academy of Pediatrics (AAP) Council on Environmental Health last June 2016,
“lead toxicity results in substantial, population-level effects on children’s
intellectual abilities, academic abilities, problem behaviors, and birth
weight. “
“No effective treatments ameliorate the permanent
developmental effects of lead toxicity. Reducing lead exposure from residential
lead hazards, industrial sources, contaminated foods or water, and other
consumer products is an effective way to prevent or control childhood lead
exposure,” the AAP said.
-end-
http://server2.denr.gov.ph/uploads/rmdd/dao-2013-24.pdf
http://www.denr.gov.ph/news-and-features/latest-news/2661-denr-applauds-boysen-davies-for-lead-free-paint-production-urges-others-to-follow-suit.html
http://pediatrics.aappublications.org/content/early/2016/06/16/peds.2016-1493