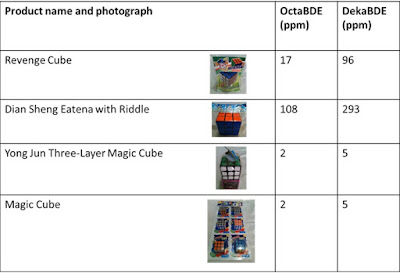 Manila, Philippines/Firenze, Italy.
Some toys that are designed to exercise the mind  may
contain toxic  chemicals from recycled
electronic waste, which can damage the central nervous system and reduce
children’s intellectual capacity.


The EcoWaste Coalition, a watch group on chemicals and wastes, aired this
observation following the announcement
of the results of a global survey on toxic chemicals in brain toys at a
scientific conference on persistent organic pollutants (POPs) in Firenze,
Italy.
The study, undertaken by IPEN (a global civil society network promoting safe
chemicals policies and practices) and Arnika (an environmental organization in
the Czech Republic) showed that samples of Rubik’s Cube-like toys from 16
countries, including the Philippines, contained toxic polybrominated diphenyl
ethers (PBDEs) called OctaBDE and/or DecaBDE.
Both OctaBDE and DecaBDE are brominated
flame retardant chemicals primarily used in plastic casings of electronic
products. These chemicals are known to
disrupt human hormone systems, adversely impacting the development of the
nervous system and children’s intelligence.
Four of the 10 samples of  Rubik’s Cube-like
toys imported from China that the EcoWaste Coalition bought from retailers in
Manila and shipped to the Czech Republic for laboratory analysis were found to
contain significant levels of OctaBDE and/or DecaBDE.  One of the samples from the Philippines  tested with the highest concentration of
OctaBDE among 47 samples from 16 countries, including European Union, Eastern
European and Southeast Asian countries.
Out of the 41 samples of puzzle cubes and six additional samples (thermo cup,
hair clip,  hand band, finger skateboard,
toy robot and hockey stick), 40 samples (85%) contained OctaBDE at
concentrations ranging from 1 to 108 parts per million (ppm), while 42 samples
(89%) contained DecaBDE, a toxic chemical commonly found in electronic waste,
between 1 to 293 ppm.
OctaBDE is already banned under the Stockholm Convention on POPs, an
international chemical treaty ratified by the Philippine government in 2004,
while Deca BDE is expected to be banned when the POPs Review Committee meets in
September 2016.
“Puzzle toys similar to Rubik’s Cubes are supposed to promote children’s
intelligence, but the presence of brominated flame retardants from recycled e-waste
creates the quite the opposite impact
on  children who play with them.
Recycling e-waste can save resources and energy, but it must be done in a way
that does not put banned toxic substances back into commerce, which can threaten
human health and the environment,“ explained Jitka Strakova,  Coordinator of the survey from Arnika.
“Our discovery of  banned  chemicals from e-waste in  common consumer products such as toys is
probably just the tip of the iceberg.
Considering the inadequate chemical safety regulations in place, it is
likely that these toxic  substances are
being recycled into a range of products that
consumers are not aware of,“ said Thony Dizon, Coordinator of the
EcoWaste Coalition’s Project Protect.
“For the health of our children and workers, we urge our policy makers to grant
no recycling exemption for POPs such OctaBDE and DecaBDE.  This dirty recycling, which often takes place
in low and middle income countries, is spreading poisons in recycling sites, in
our homes and in our bodies,“ he further said.
In 2009,  the Stockholm Convention listed
PentaBDE and OctaBDE for global elimination, but the treaty  still permits the recycling of materials
containing these toxic  chemicals until
2030.
“As long as we allow the recycling exemptions, we will be unable to control the
flow of these dangerous flame retardants,“ said Joe DiGangi, Senior Science and
Technical Advisor of IPEN.
-end-
Reference:

http://www.ipen.org/documents/health-and-environmental-hazards-pbdes-and-other-bfrs
http://ipen.org/documents/toxic-toy-or-toxic-waste-recycling-pops-new-products
IPEN is a leading
global network of 700 non-governmental organizations (NGOs) working in more
than 100 developing countries and countries with economies in transition. IPEN
works to establish and implement safe chemicals policies and practices to
protect human health and the environment. EcoWaste Coalition and Arnika are
active members of the network.www.ipen.org  twitter: @ToxicsFree