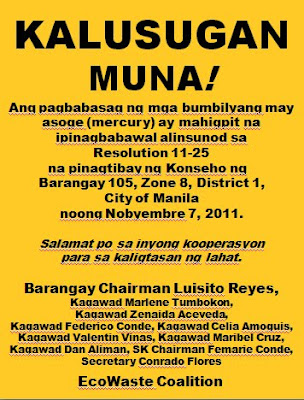 Before taking time off from their backbreaking work to watch the Pacquiao-Marquez boxing match, informal recyclers in Tondo, Manila on Sunday morning first had their “fight” against toxic pollution.
In an event organized by the EcoWaste Coalition, an environmental watchdog, recyclers of all ages and genders, many of whom live and work next to the Pier 18 Garbage Transfer Station, gathered together to get acquainted with a new barangay policy to reduce harmful mercury emissions in the community.
Held in collaboration with the Barangay Council of Barangay 105, Zone 8, District I of the City of Manila and the Nagkakakisang Mananambakan sa Dumpsite Area (NMDA), the information meeting saw local officials led by Barangay Chairman Luisito Reyes and Kagawad Marlene Tumbokon explaining Resolution 11-25 that bans the breaking of busted mercury-containing lamps in the area.
Inspired by Manny Pacquiao, the Filipino boxing legend, an “AlerToxic” boxer aimed his giant red foam gloves against volunteers wearing headgears adorned with mock compact fluorescent lamps (lamps) symbolizing the threat of toxic pollution from the improper recycling and disposal of mercury-containing lamps.
The headgears are marked with a precise reminder for all: “huwag basagin,” “break not.”
“We have come here to help the Barangay Council in explaining to our valued informal recyclers that breaking CFLs to recover recyclable parts is very dangerous to health and is best done by authorized recyclers,” stated Thony Dizon, Coordinator of Project Protect, EcoWaste Coalition.
“The practice of manually breaking CFLs and other similar lamps causes mercury in the form of vapor to escape into the environment,” he said.
“Inhaling mercury vapor is damaging to the brain and the central nervous systems, as well as to the kidneys and the liver,” he warned.
Government data indicate that 88% of households and 77% of commercial establishments disposed of their busted fluorescent lamps as regular waste, raising the spectre of mercury toxicity in mixed waste garbage disposal facilities such as dumpsites.
Informal recyclers painstakingly retrieve the discarded lamps, store them up in sacks and then break the lamp, piece by piece, with a hammer to salvage the aluminium and copper components for recycling.
In a bold decision “to safeguard the public health and the environment from toxic pollutants,” the Barangay Council adopted last Monday Resolution 11-25 banning the breaking of mercury lamp waste in the community. The ban will formally take effect on December 7.
Under the said resolution, junk shop operators in the area will be likewise banned from buying aluminum and copper obtained from the improper recycling of mercury-containing lamps to stop unsafe recycling.
The Barangay Council also decided to approach concerned national and city government agencies to get their advice and assistance on the environmentally-sound management of mercury-containing lamp waste.