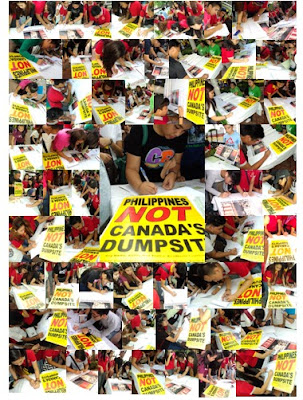 Some 1,375 Filipinos today wrote to Canadian Prime Minister Justin Trudeau to reclaim the illegal garbage shipments that have been rotting in Manila and Subic ports.

The petitioners, mostly students from Manila’s universities and colleges who signed the urgent appeal at the 2nd Zero Waste Fair held on January 30-31 at Rizal Park,  stated that “we would never allow our country to be treated as Canada’s dumpsite.”
The event, culminating the government-proclaimed observance of the Zero Waste Month, was organized by the EcoWaste Coalition, Global Alliance for Incinerator Alternatives, Greenpeace Southeast Asia, Health Care Without Harm Asia and Mother Earth Foundation.
“Our government officials, our legislators, our environmental, labor and church leaders and our fellow  citizens, as well as the media, have spoken against the shameless dumping scandal, emphasizing in clear and strong terms that the Philippines is not a global landfill and that Canada has no option but to take its garbage back,” the petitioners reminded Trudeau.
Between 2013-2014, a total of 103 shipping containers of mixed household garbage from Canada disguised as scrap plastics for recycling reached the Philippine shores.  Twenty six containers were illegally disposed of at a landfill in Tarlac in 2015 until bared and halted by furious citizens and officials.
A waste characterization study conducted by the government in 2014 confirmed that 63.94% of the garbage shipments were residuals, which can no longer be recycled and should be properly disposed of.
“When you visited our country last November 2015 for the APEC Summit, we expected you to at least announce that Canada would take responsibility for its garbage.  You disappointed us when you vaguely stated that a  ‘Canadian solution’ is being developed and made no firm declaration to re-import your garbage,” they told Trudeau.
The petitioners asked Trudeau to pursue the “Canadian solution” with urgency and cited three points that should be covered by the so-called solution: 1) return the illegal trash exports for environmentally sound disposal in Canada, 2) pay the Philippines for all the costs it incurred, and 3) fix the legal loopholes that allowed the unlawful export of Canadian waste to the Philippines.
“We remain hopeful that you will be different from former Prime Minister Stephen Harper who was blind and deaf to our plea for environmental justice, and act with firm resolve and speed to get your garbage back,” they said.
Last month, Canadian Ambassador to the Philippines Neil Reeder said that the illegal trash shipments will be disposed of “in a sustainable manner and in a productive manner,” but was unclear as to where these will be disposed of.
“We hope not in the Philippines as this will be totally objectionable and will be met with protests,” the petitioners emphasized.
In reaction to the envoy’s statement, Rene Pineda, Vice-President of the EcoWaste Coalition  said: “If the Canadian government in sincere and certain that an ecological remedial measure can be devised, they should rather perform such procedure in its own jurisdiction.”
“For this is the only way it can prove itself before the Filipino nation and the global community that it is sincere and its proposal is safe,” he added.
-end-