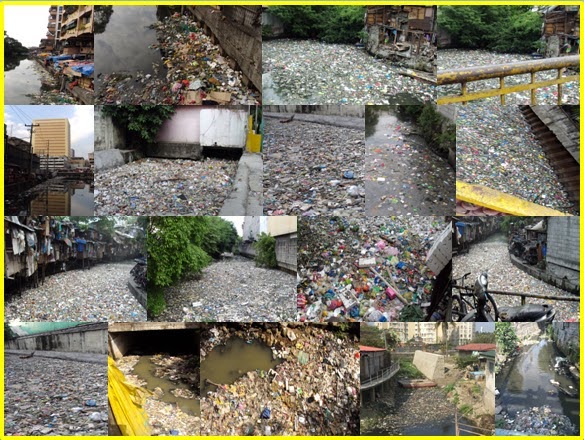 Quezon City. The EcoWaste Coalition, an environmental watchdog, called for heightened enforcement of R.A. 9003, the Ecological Solid Waste Management Act, ahead of the 10th anniversary of R.A. 9275, the Clean Water Act, on March 22, the World Water Day.
R.A. 9275, signed on March 22, 2004 by former President Gloria Macapagal Arroyo, applies to water quality management in all water bodies and focuses on abatement and control of pollution from land based sources.
To draw attention to the irresponsible disposal practices from households and other generators that are choking many of Metro Manila’s esteros with garbage, the EcoWaste Coalition deployed its Basura Patrollers on March 17 and 18 to take photos of clogged waterways in Caloocan, Malabon, Manila, Quezon and Taguig Cities.
“The photos we took paint a harrowing picture of how we treat our waterways as if these are dumpsites,” said Aileen Lucero, National Coordinator, EcoWaste Coalition.
Lucero identified the esteros in the following places in Manila as “top” in terms of floating garbage: Recto Ave. near Jose Abad Santos Ave., Recto Ave. near Juan Luna St., Old Torres St. – Juan Luna St., Soler St. near Masangkay St. and Arlegui St.
“While pleased with the ongoing efforts by private and public groups to rehabilitate Estero de Paco and other  esteros, we find that reckless waste disposal continues to spoil and clog our waterways,” she noted.
“Sooner or later, the rainy season will set in and again threaten our communities with intermittent rains and devastating flashfloods that we all know are exacerbated by blocked waterways,” she said.

“What more do we need to grasp the reality that whatever we recklessly throw will return to haunt us?” she asked.
“It’s high time that we all act with environmental responsibility, reduce our trash to the least and reuse, recycle and compost as much as we could to bring to life our vanishing esteros,” she said.
The EcoWaste Coalition noted that both R.A. 9003 and R.A. 9275 ban and penalize waste dumping.

R.A. 9275, in particular, prohibits the “discharging, depositing or causing to be deposited material of any kind directly or indirectly into the water bodies or along the margins of any surface water, where, the same shall be liable to be washed into such surface water, either by tide action or by storm, floods or otherwise, which could cause water pollution or impede natural flow in the water body.”
As documented by the group, the flotsam in the esteros is comprised mainly of plastic-based materials such as bags, wrappers and polystyrene packaging for food and non-food items, which are basically the same discards that are finding their way from the esteros to Manila Bay.
The discards survey conducted in 2006 by the EcoWaste Coalition and its partners showed that plastic materials constitute 76% of the floating trash in Manila Bay, with plastic bags comprising 51%; sachets and junk food wrappers, 19%; Styrofoam containers, 5%; hard plastics, 1%, and the rest were rubber at 10% and biodegradable waste at 13%.
A follow-up discards survey in 2010 also found 75.55% of the collected rubbish in Manila Bay as composed largely of plastic discards, mostly plastic bags and polystyrene products.
“On the occasion of the World Water Day and the 10th year of R.A. 9275, we appeal to all to practice ecological solid waste management and go zero waste to stop the trashing of our esteros and water bodies,” the EcoWaste Coalition said.
-end-
Reference:
http://www.lawphil.net/statutes/repacts/ra2004/ra_9275_2004.html