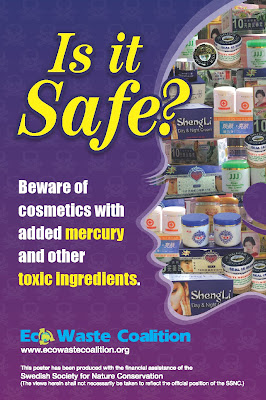 This is the crucial three-word question that health-conscious consumers must ask when buying cosmetics, a toxic watchdog said.

As love-struck Filipinos celebrate Valentine’s Day, the EcoWaste Coalition, an advocate for chemical safety, drew attention to the hidden dangers lurking in cosmetics that are meant to enhance or create desired personal features.

EcoWaste members marked the red letter day by congregating in Plaza Santa Cruz in downtown Manila with a big yellow banner that says “Mercury-Added Cosmetics: Injurious to Health” as backdrop.

During the event, the group unveiled a Medusa-like villain named “Valentoxic” after “Valentina” the arch-foe of Pinoy comic book heroine “Darna.”

In her first public appearance, “Valentoxic” drew public attention against mercury-added skin lightening products that are quite popular, especially among women and youth seeking to “improve” their skin complexion.

“Valentoxic in her debut is calling attention to the ‘out of control’ sale of banned skin lightening products that poison unsuspecting consumers with mercury, a dangerous neurotoxin,” said Aileen Lucero, safe cosmetics campaigner of the EcoWaste Coalition.

“Filipino consumers deserve nothing less than safe and truthfully labeled products that are free of mercury and other harmful ingredients,” she emphasized.

Like the Greek “Medusa” and the Pinoy” Valentina,” “Valentoxic” has “snakes” for hair, which were accented with small bottles of skin whitening creams that the Food and Drug Administration (FDA) had previously banned for containing elevated levels of mercury.

From Plaza Santa Cruz to Plaza Miranda, “Valentoxic” went from one Chinese drug store to another, giving shop owners copies of the FDA’s directives recalling mercury-tainted skin whitening products. They also gave out copies of the latest EcoWaste Coalition’s poster advising consumers to stay away from unsafe cosmetics.

In January, February, June and August 2010, the FDA banned a total of 28 brands of mercury-laced skin lightening products, all imported, from mainland China, Hong Kong, Taiwan and Japan, for posing “imminent danger or injury to the consuming public.”

Prior to the event, the EcoWaste Coalition’s AlerToxic Patrol conducted another round of “test buys” from February 1 to 10 of the FDA-proscribed skin whitening products.

“Despite repeated warnings from government regulators and threats of legal action, we still find the recalled dangerous products in the market,” bewailed Lucero, who, along with volunteers, conducted test buys of the proscribed items.

“Most shops that we went to sell the banned items openly, giving official or informal receipts upon request. While others sell them under-the-counter, refusing to provide any proof of purchase,” she recounted.

“The results of our test buys should provoke the health and police authorities to take stern action to close down the illicit trade that constitutes direct threat to public welfare,” she added.

To underline the hazards of mercury-added cosmetics, the EcoWaste Coalited cited the “Health Alert” on “Mercury Poisoning Linked to Use of Face Lightening Cream” issued by the California Department of Public Health (CDPH) in May 2010.

The said health advisory has identified several symptoms of mild to moderate mercury toxicity due to the reported use of unlabeled, non-prescription facial cream for lightening the skin, fading freckles and age spots, and for treating acne.

According to CDPH, symptoms of mercury toxicity may include nervousness and irritability, difficulty with concentration, headache, tremors, memory loss, depression, insomnia, weight loss, and fatigue. Other symptoms may include numbness or tingling in hands, feet, or around the lips.

Toxic effects on the kidneys may cause proteinuria, nephrotic syndrome, and renal tubular acidosis. Gingivitis and excessive may also be observed.