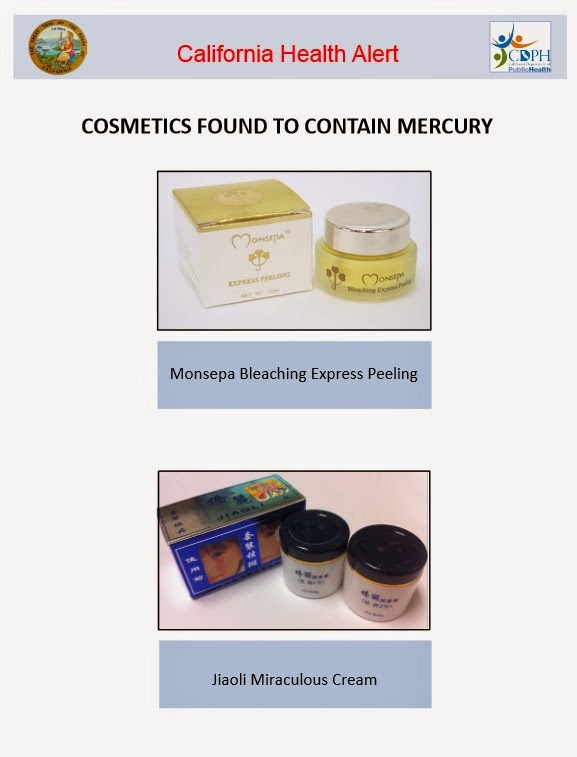 Quezon City.  An imported skin whitening product banned by the health authorities on February 9, 2010 for containing mercury levels above the allowable limit of one part per million (ppm) has resurfaced in Quiapo, Manila.

The forbidden items were procured for P80 to P100 per box from three retailers in Manila’s Quiapo District, namely, New Era Chinese Drug Store (1604 C.M. Recto Ave.),  Water Dragon General Merchandise (652-A Carriedo St.) and from a street vendor at the corner of R. Hidalgo St. and Quezon Blvd.)

Based on the XRF screening, the average level of mercury in the five samples of Jiaoli Miraculous Cream was 3,049 ppm for the day cream and 4,196 ppm for the night cream.

“Jiaoli Miraculous Cream was banned in 2010 in the interest of protecting consumer health and safety, and four years later we still find retailers selling it in callous disregard for the public good,” lamented Aileen Lucero, National Coordinator, EcoWaste Coalition.

“Mercury-laden cosmetics and personal care products pose real threats to human health and the environment throughout their life cycle, from production to disposal, and should not be made and traded at all,” she said.

The EcoWaste Coalition’s latest market surveillance was prompted by a recent Health Alert by the California Department of Public Health (CDPH) warning the American public not to use Jiaoli Miraculous Cream and Monsepa Bleaching Express Peeling that have tested positive for high levels of mercury.

Last January 9, 2014, the CDPH advised consumers to discontinue the use of such products as “regular or prolonged exposure can result in mercury poisoning.”

As per CDPH, “symptoms of mercury poisoning include irritability, depression; nervousness, difficulty concentrating or remembering; fatigue; tremors, shaking or weakness; tingling or numbness in hands, feet or around the mouth.”

To address the persistent problem, particularly in the city of Manila, the EcoWaste Coalition urged Mayor Joseph Estrada, Vice-Mayor Isko Moreno and the City Council to expedite the enactment of a city ordinance filed by District II Councilor Numero Lim to stop the illegal sale of injurious mercury-containing cosmetics.

If enacted, the said ordinance, consistent with R.A. 9711 or the Food and Drug Administration Act of 2009, will penalize individual violators with imprisonment from one to 10 years or a fine from P50,000 to P500,000, or both.

“The stiffer penalties, we hope, would make it unprofitable for recalcitrant manufacturers, importers, distributors and retailers to engage in the illicit trade,” Lucero
added.

In addition, the EcoWaste Coalition urged the Bureau of Customs,  the Department of Interior and Local Government, the Department of Environment and Natural Resources, the Philippine National Police and other relevant government institutions to support the FDA’s drive against illegal cosmetics, stressing that “interagency cooperation backed by the industry, civil society, media and the consumers” is key to getting dangerous mercury-laden cosmetics off the market and ensuring the environmentally-sound management of recalled or seized stocks.