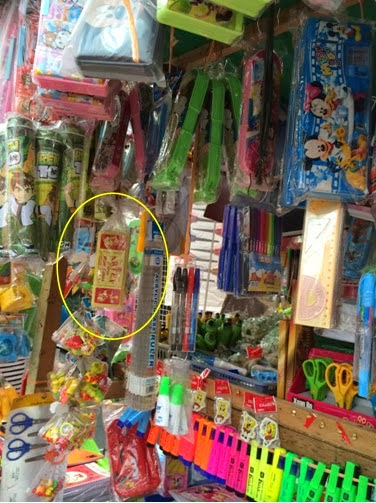 Some street vendors of school supplies in Baclaran’s bargain district, like their counterparts in Divisoria, are selling a brand of locally-manufactured water color sets containing high levels of lead, an extremely hazardous substance that can irreparably damage a child’s developing brain.
The EcoWaste Coalition, a toxics watchdog, has confirmed that Artex Fine Water Colors are being sold in Baclaran for P65 to P85 per set after conducting a market surveillance along F. B. Harrison Street and Taft Avenue Extension in Parañaque and Pasay Cities on Wednesday, May 21.  The group had earlier found bargain retailers selling the said product at street stalls in Divisoria, Manila.
Samples of Artex Fine Water Colors that the group had sent to SGS, a global testing company, for laboratory analysis were found positive for lead in the range of 5,900 to 37,000 parts per million (ppm), specifically on the yellow block.
“The presence of high levels of lead in Artex Fine Water Colors warrants automatic product recall, which, sorry to say, has yet to happen,” lamented Thony Dizon, Coordinator of the EcoWaste Coalition’s Project Protect.
“We first notified the manufacturer Venus Commercial Co. and then our health and trade regulators about this threat to children’s health, but we have yet to hear an order from either the company or the government withdrawing Artex from the market,” he said.
“It’s no wonder that vendors still sell Artex, which uninformed consumers buy,” he added.
In line with its ongoing “waste-free, toxic-free back-to-school” campaign, the EcoWaste Coalition  exhorted the national and local authorities to act with speed and resolve to stop the rampant sale of the lead-laden water color sets.
“As parents go on a back-to-school shopping spree, we appeal to both the national and local authorities to take immediate and decisive steps to rid the market of dangerous and substandard school supplies like Artex Fine Water Colors.  Kung hindi ngayon, kailan pa?,” he pointed out.
The Department of Health – Food and Drugs Administration (DOH-FDA) had confirmed with the Department of Trade and Industry – Bureau of Trade Regulation and Consumer Protection (DTI-BTRCP) that Venus Commercial Co. has  “no valid license to operate (LTO) nor has pending application for issuance of LTO,” and that Artex Fine Water Colors “is not registered/notified nor is there pending application for registration/notification.”
According to the US Environmental Protection Agency (EPA), “lead is particularly dangerous to children because their growing bodies absorb more lead than adults do and their brains and nervous systems are more sensitive to the damaging effects of lead.”
“Even low levels of lead in the blood of children can result in behavior and learning problems, lower IQ and hyperactivity, slowed growth, hearing problems, anemia and, in rare cases, ingestion of lead can cause seizures, coma and even death,” as stated by the US EPA.
-end-
Reference:
http://www2.epa.gov/lead/learn-about-lead
http://server2.denr.gov.ph/uploads/rmdd/dao-2013-24.pdf